Rachel Dolezal (The Blackest woman alive according to Whoopi Goldberg) has accidentally stumbled on a frequently overlooked truth. To recap; Rachel’s convincing “biracial-face” gave her access to a high ranking NAACP post, and unlimited N-word privileges. Surprisingly, I have sympathy for her; because she is likely fairly mentally ill (Or has fooled us again). But I still find her story highly annoying. For one, it introduced the term “trans-racial” into our cultural lexicon. And like reverse-racism; THAT’S NOT A THING! But also irking me, is that Dolezal was able to profit on her delusions of Blackness; proving that co-opting Black American culture is a lucrative business…. Which brings me to Hip Hop, where Blackness and street cred is valued, and frequently counterfeited. Dolezaling in Hip Hop isn’t just about race… Anybody who misrepresents who they are to sell records can be a Hip Hop Dolezal. So let’s take a look at the rappers who have Papa Doc-ed their way to millions.

(Will all the Rachel Dolezals please stand up?)

CLAIM: To Have “Started From The Bottom”

WHY THAT’S BULLSHIT: Look, I’m a fan. So this hurts me more than it hurts sexy millionaire Drake. And since it doesn’t hurt me at all, I’m pretty sure he’ll survive this call-out on an obscure Hip Hop/comedy blog. “Started From the Bottom” is a great track. Drake has already defensively explained that the bottom is having to work hard and struggle. Perhaps he’s referring to his journey of becoming a Hip Hop heavyweight, while also being a Canadian with a unibrow. That’s no small feat. Drake is talented and has for sure worked hard. .. But that is a convenient definition of the bottom. Especially in Hip Hop. A music genre with roots in America’s ghettos… You know the ghetto Aubrey? The actual bottom (Where your accent comes from). Not Forest Hill, Ontario. Or the craft table on the Degrassi set. We can’t redefine the bottom every time somebody achieves something. It minimizes the struggles of people at the actual bottom. It would be like always being able to use your legs, and then miraculously rising out of a wheelchair every time you entered a room. Drake, you’re not Jimmy! In fairness to Drizzy, “started from the upper middle class” is slightly less catchy. 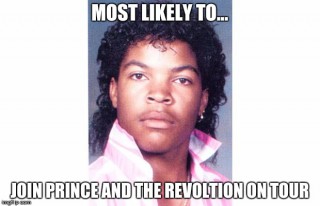 WHY THAT’S BULLSHIT: Ice Cube is considered a godfather of “gangsta rap”. As the main writer for N.W.A, Cube was frequently accused of glamorizing violence and crime as a lifestyle. But fans would defend Cube, saying, “That’s his truth… Cube grew up in the streets son! He’s talkin’ bout real life!”. And there is no doubt that Ice Cube was talking about somebody’s life… Just not anybody he was allowed to play with. Ice Cube went to a good high school, lived in a strict 2 parent household, and attended the Phoenix Institute of Technology, where he briefly studied architectural drafting…. But it turns out that pretending to own and use a “sawed-off”, will buy you more Jerry Curl activator, than a career designing homes. And who cares if your lyrics are wildly irresponsible because you’re promoting a dangerous life that you’re not at all about? You only have to check yourself before you wreck YOURSELF.

CLAIM: Kept It Too Real

WHY THAT’S BULLSHIT: I barely care enough about Plies to include him in this list. But excluding him  would be like excluding shit from a list of worst smells. (Plies is a piece of shit). Much like Ice Cube, Plies’ lyrics glamorize violence and selling drugs… He also seems to enjoy rape (Piece of shit!)… And according to him he’s a real criminal. But it turns out, he’s just a real idiot. Here’s where Ice Cube gets points over Plies. Ice Cube had a socially conscious angle to some of his music; which doesn’t absolve him of profiting off of a false gang image; but at least some good may have come out of it. Also, Ice Cube had the presence of mind to lie about his criminality before the invention of the internet. Plies, on the other hand, was exposed by hiphopdx.com (original article not found). He’s been arrested twice at the age of 32… Once on a misdemeanor charge of resisting an officer without violence (Being Black?); and the second charge was a misdemeanor count for possession of a concealed weapon… So he’s almost as dangerous as Justin Bieber. 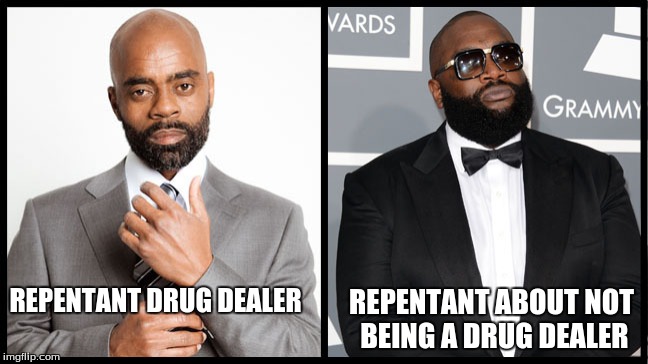 WHY THAT’S BULLSHIT: Rick Ross was one of the most dangerous crack dealers in the U.S. How dangerous? “Between 1982 and 1989, federal prosecutors estimated, Ross bought and resold three tons of cocaine. In 1980 dollars, his gross earnings were said to be in excess of $900 million — with a profit of nearly $300 million.” He definitely ruined parts of America; yet was indisputably good at his job… But don’t confuse drug dealer “Freeway” Ricky Ross with rapper Rick Ross. They are not the same person, despite rapper Rick Ross’ definite attempts to confuse you. For starters, rapper Rick Ross (Real name: William Leonard Roberts II) started out as a corrections officer… He also looked like this. And there is nothing wrong with any of that… Unless you are trying to make money off of the idea that you were one of the biggest drug king pins in the Continental U.S. Also, take a look at both Rick Rosses. Rapper Rick didn’t just take the guy’s name, he took his whole bald with a beard aesthetic. It’s like Face-Off, but both guys are claiming to be criminals. And if you still have any doubt that Rapper Rick Ross isn’t trying to pull a “Single White Female”; take a listen to Hustlin, were this Carl Winslow motherfucker says “I know Pablo, Noriega/The real Noriega, he owe me a hundred favors” (Why, did you sneak him some extra pudding after lights out?).

WHY THAT’S BULLSHIT: I have already gone into some detail about this… So I’ll just skip to the heart of it. Iggy is from Australia, and regularly speaks in a perfectly normal Australian accent… But when she raps, she’s Brenda from 227. And I have heard people justify the accent change by saying, “No, well, she grew up poor”….What? Being poor is not synonymous with being Black! In a whole other continent! She makes piles of money off of co-opting African American women’s voices; in Nicole Kidman packaging. And what makes it worse than Dolezal (slightly), is that she is completely disingenuous. At least Rachel’s delusions made her want to be an ally. The Igster’s minstrelsy is way less well intended. There’s the stolen Kendrick Lamar verse done in gibberish; her ignorant pre-fame Twitter account; refers to herself as a “runaway slave master“. All of this on her record, and she is still legitimized and defended by the industry. It’s annoying. But if you have any questions about Iggy’s passion for Hip Hop culture; check out what homegirl was doing before she discovered hoop earrings and bomber jackets: 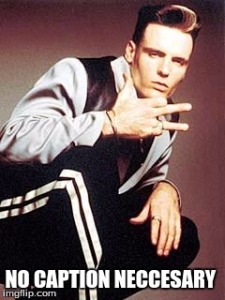 Some would argue that when it comes to Dolezaling in Hip Hop, Vanilla Ice could body this whole list. But Vanilla Ice was never convincingly street… He was barely convincing as a human being. Robert Matthew Van Winkle was quickly seen as a corporate tool, used to sell merchandise to disillusioned New Kids On The Block fans. He made a little money, and got to fuck Madonna (just like Tupac); but I’m not sure that he ever convinced anybody that he was anything other than a Hip Hop Ken doll. He gets points for surviving his run in with Suge Knight.